with Act for Change & London College of Performing Arts 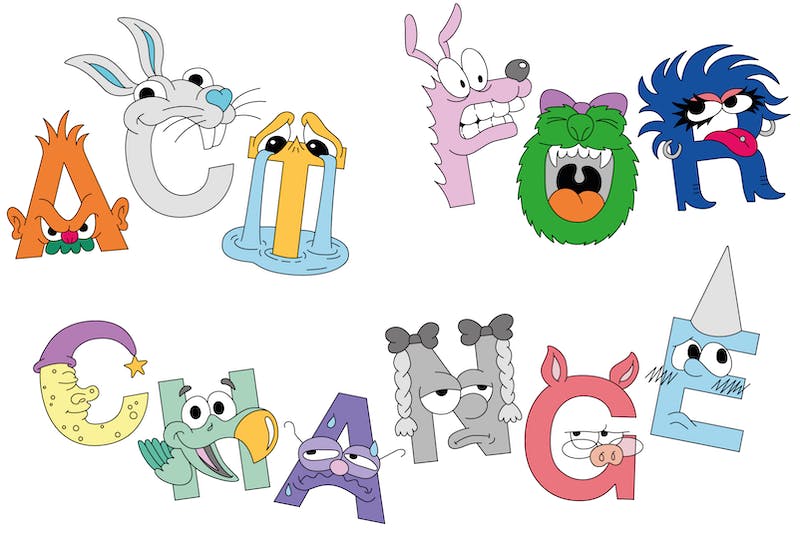 Act for Change is developing a new daram project that supports young people to explore their mental health in a safe, positive and creative way.

During the pandemic, the psychotherapist Lea Misan wrote a book about self-expression that she never intended for publishing. But it soon came to her and her coworker’s attention that it could be transformed into a counselling tool used in workshops in schools to help students express themselves in a new creative way. Lea Misan is the director of a mental health charity called Act for Change in Bexley that works with young people and their families to overcome trauma, abuse and difficult situations. Act for Change worked with clients receiving therapy to co-create an improv tool that consists of 36 drawn characters on cards that each relate to a different positive or negative emotion. The tool offers a two-inone: service users can explore their own life experiences more thoughtfully with the help of the prompts on the cards, whilst also creating theatre in the process.

Act for Change has been running two pilot workshop with the London College of Performing Arts here in Bexley so I went along to see how it played out. None of us knew what to expect which was a good thing because it meant there would be authenticity to the feelings expressed in the workshop. The first part was like the beginning of a drama class where the participants had to play a game to connect with their feelings and then come back to the present with a grounding exercise. When Lea explained the cards to the students there was some confusion, which I understood — it was only after seeing the explanations written on each card that it became clear what this workshop was about, so giving them out as soon as it begins would help things run more smoothly going forward.

After everyone chose a card, they went to prepare their part and the actual therapy started. Students had been encouraged to choose a card with an illustration that they would normally stay away from, something that was uncomfortable and challenging to them. This is because Lea believes that when you express yourself through a different figure, your words flow more naturally because suddenly it is not you talking but the other character that you are giving life to. In my honest opinion, I believe some students connected better than others with the game but I believe it’s only natural to not feel comfortable when you do something new. Not all of us are open to new and uncomfortable situations — especially teenagers. In the future, it would probably help if one of the people running the programme took a few minutes to explain that this is more about how the person feels at that moment in time than about creating a piece of theatre. It is true that this workshop was created to combine the two but a more elaborate explanation about how this is supposed to work would definitely help. As I said, some of the students admitted that they found it a bit confusing.

I believe it is still too early to know how effective Act for Change’s counselling tool could be, and it is difficult to know if teachers would use it to make up for the lack of counselling in schools and society in general. A recent UK study has shown that efforts to teach mindfulness in schools failed to improve students’ mental well-being, so maybe having something more participatory such as this new tool could make a positive difference in helping students to connect and open up more (BBC, 13 July 2022). In this era of technology, we see a massive decrease in the ability and comfortability of people to communicate face to face. There is less openness between us too, so every trick for expression can help us achieve a better world. The new generations are our future. It is our duty to give them the help they need to get there.

For now, the workshops are running in Bexley, close to home, as a test to see if they have any success. If schools show interest, the programme will be introduced to more students. I believe that it’s not only Bexley that needs workshops like these, but the entire country. There is no secret that the mental health services need all the help they can get. Running these workshops in schools could provide a fresh breath of air to the system.